Building a bar out of a 42U Rack

September 2018, two good friends are in my living room and we are discussing what weird project that would be interesting to undertake for ANDERSTORPSFESTIVALEN 4. We discussed a lot of ideas but one thing that stood out was highlighting the romance to the old internet. Back then every part about computers seemed impossible, modems and browsers was such a futuristic experience and the general gist at that time was that this technology would pave the way for a new form of communication. It eventually did, but lost behind was this excitement over technology. Today technology is almost transparent, people think about the applications rather than the technology and lost is the art of tuning a modem to achieve higher speeds over a phone wire.

What if we could capture some of our feelings from this time and create something to homage this era. This idea grew on us until we during a brief visit to one of the large tech companies saw a 42U rack laying on it’s side, remade into a bar. It was a rudimentary design and probably more thought of as a joke but it resonated with our group. We talked about it for the rest of the evening and ended up drawing a rudimentary design on paper. 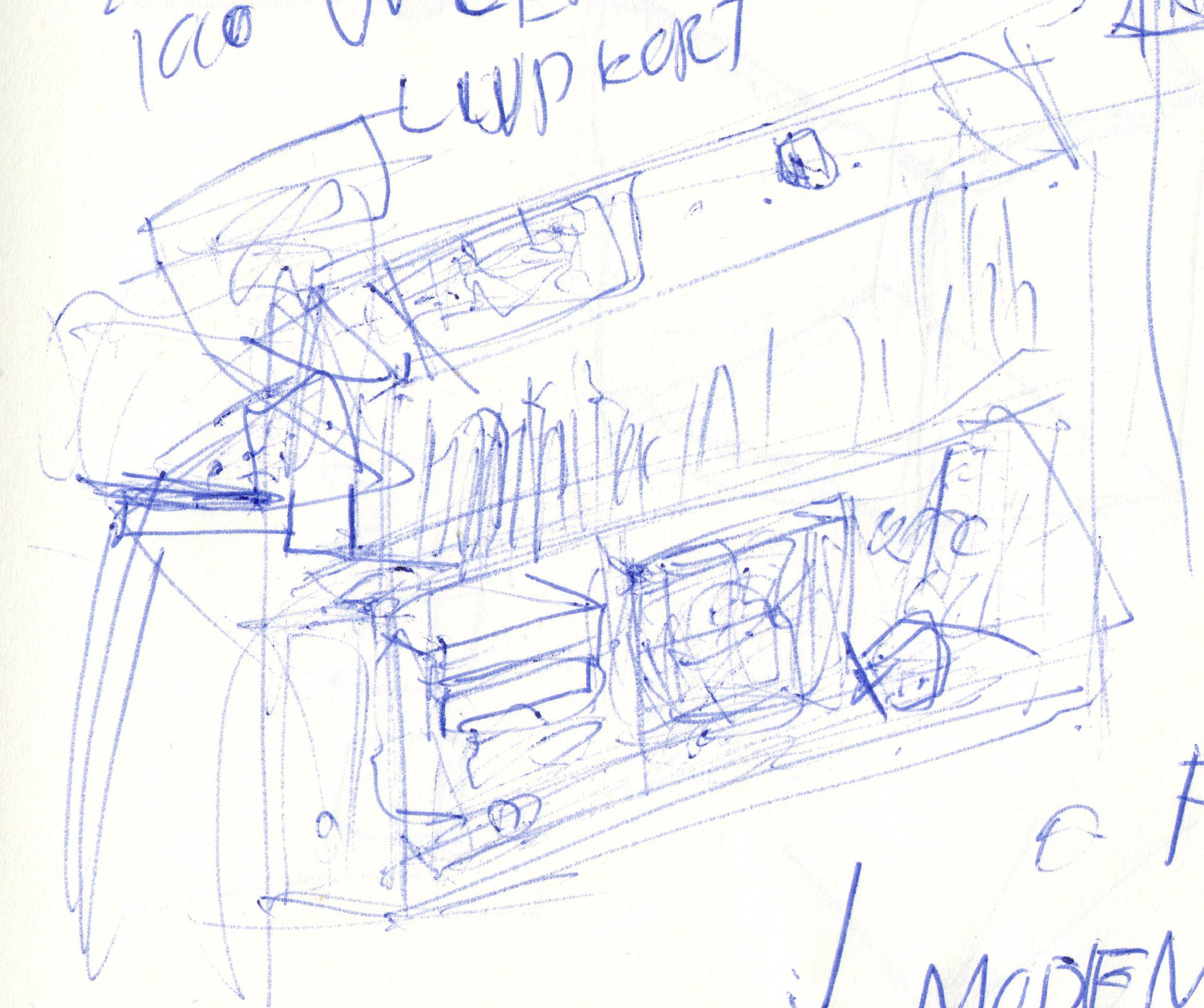 You probably can’t make anything out of this, but we essentially envisioned this rack resting on the back part instead of the side with one of the sides being cut out with a large piece of plexiglass. Inside would be filled with technology, alcohol and cabling supporting the idea. We distilled it down to being a hybrid physical bar with the innards being the actual inventory display. In the rack we would mount 2 x Cisco 2960 powering the festival network, a monitor for statistics and 2 x 56k modem in order to uplink data for this monitor (more about this later). The inventory display would be a tilted plane with fake ice that has color backlighting in order to create this diffuse light effect that would shine through and illuminate the bottles from behind. The back of the inside of the rack would be large UV painting done by Johanna supplemented by internal UV LED lighting in order to make the patterns stand out.

The problem with deciding on ideas like this is that everyone has their own variation of this concept in their head. During this project I started to understand why gaming companies have concept artists on payroll, as they are the people setting the actual tone and feeling of a visual design before artists implement this into the medium itself. Since this was starting to become and issue for us and discussions started looping around, I drew up a model in Cinema 4D and rendered out some concepts that we iterated on together until everyone was onboard with the concept 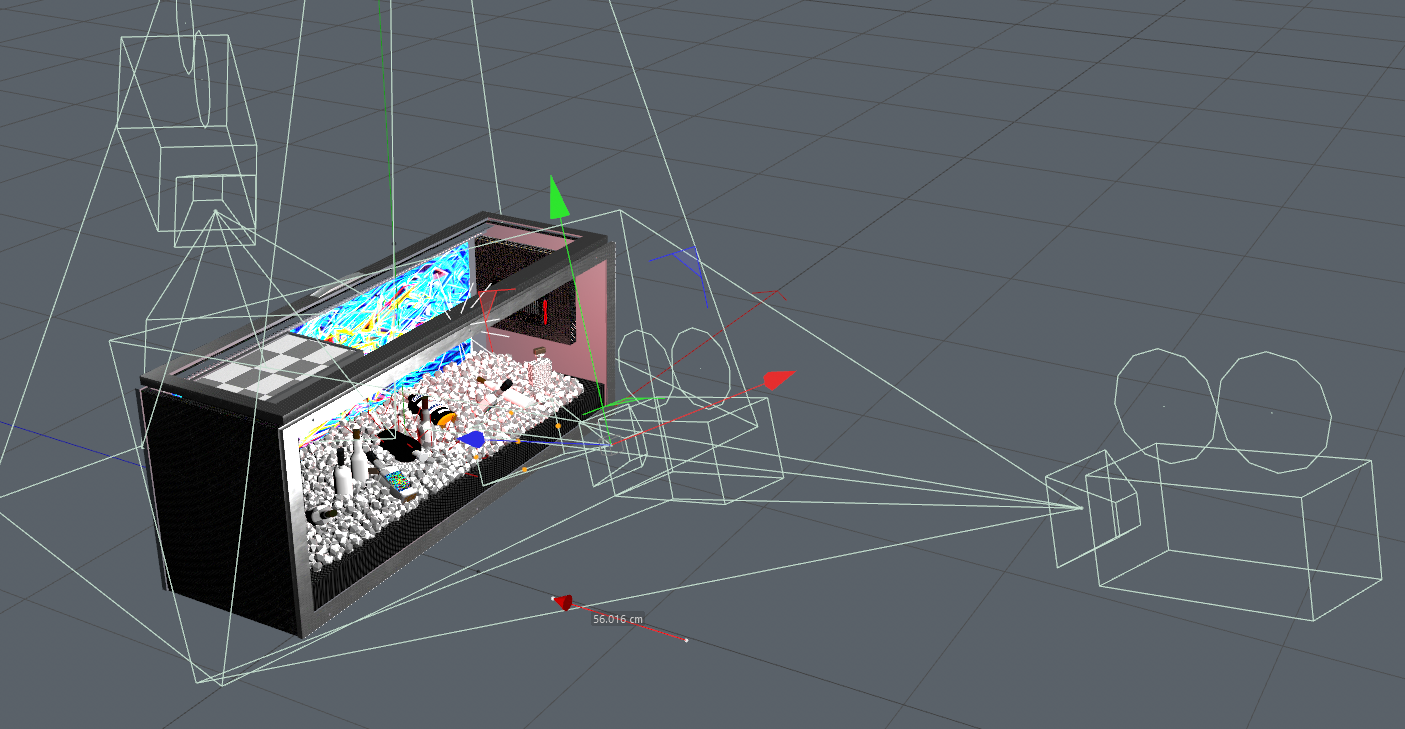 This rendering is from the front and clearly shows most of the elements described above, the UV painting, fake ice, vertically mounted switches and 56k modems mounted on the switches. 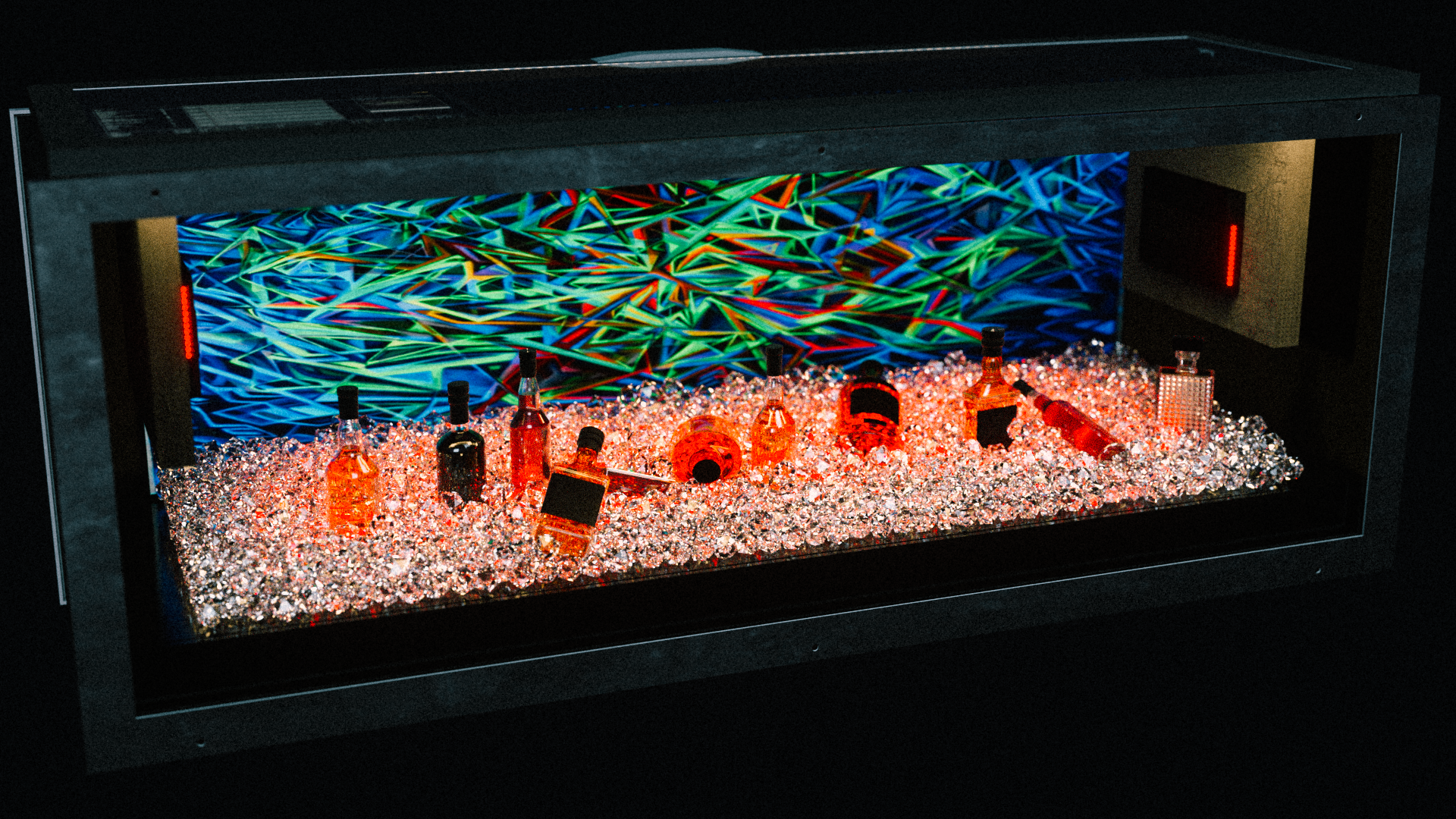 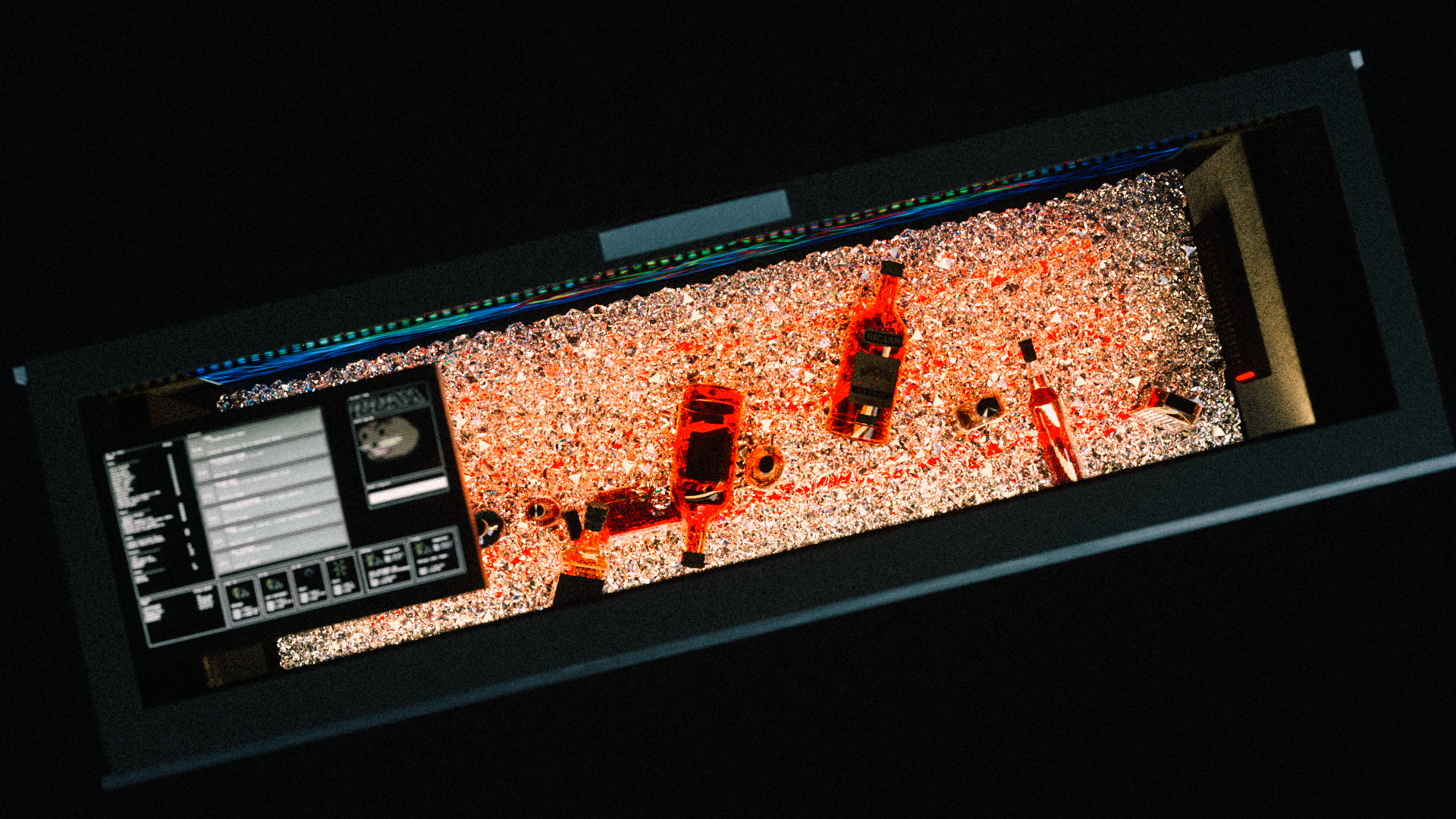 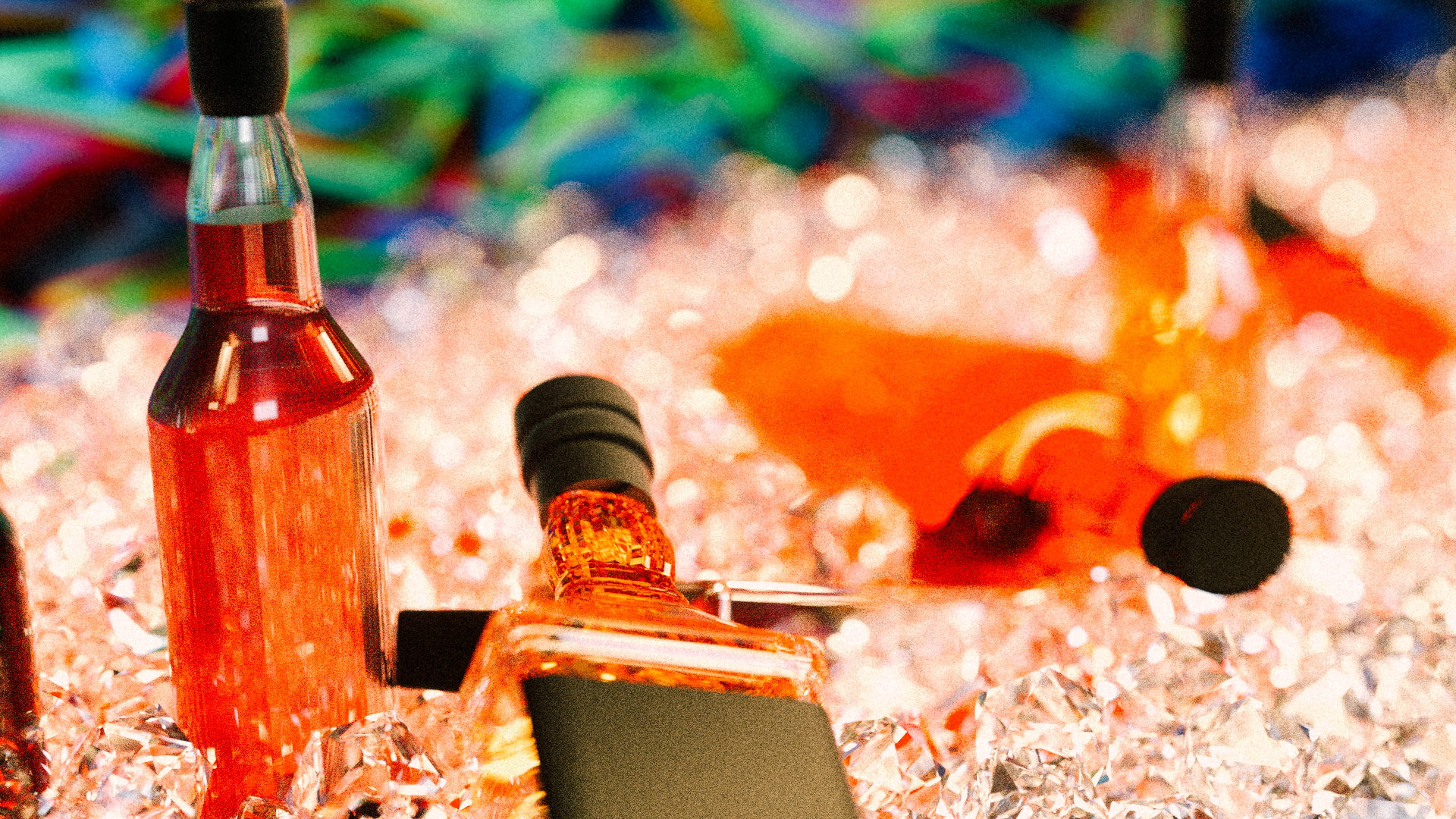 So how does one go from these renderings into an actual physical build? The first part is to actually get hold of a 42U rack. Said and done, Alexander and Viktor manages to scrape up a rack that’s about to be thrown out of a server hall in Stockholm and drive this bad boy all the way down to Anderstorp in order to be stored until the build begins. 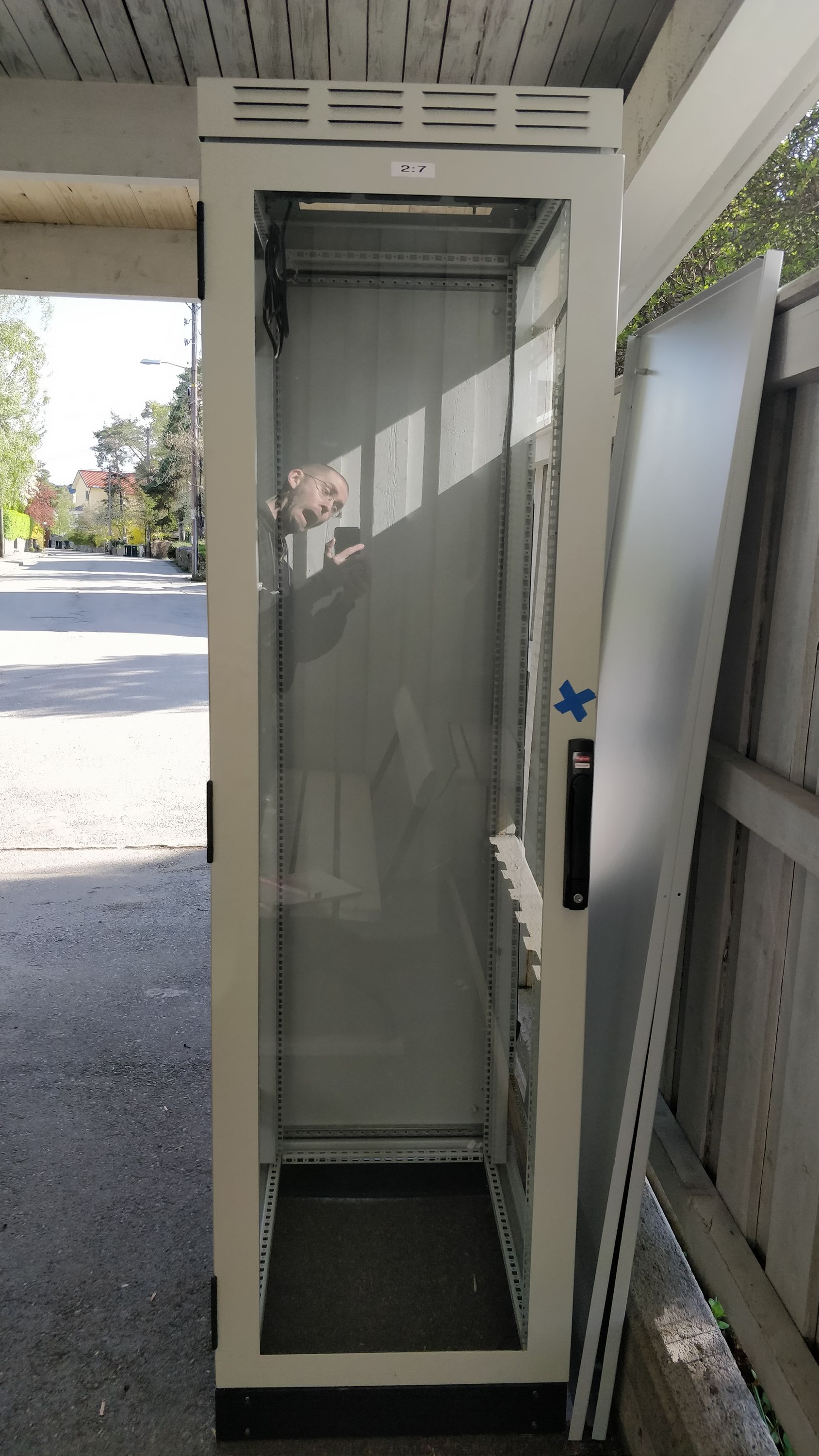 A couple of months later, the build of Anderstorpsfestivalen 4 starts and we load this massive slug onto a trailer in order to bring it to the festival site. Remember that this thing weighs over 130 kilos so it is less of a fun experience carrying this around. It’s also not often you see a 42U rack loaded up with 20 cases of beer on a trailer. 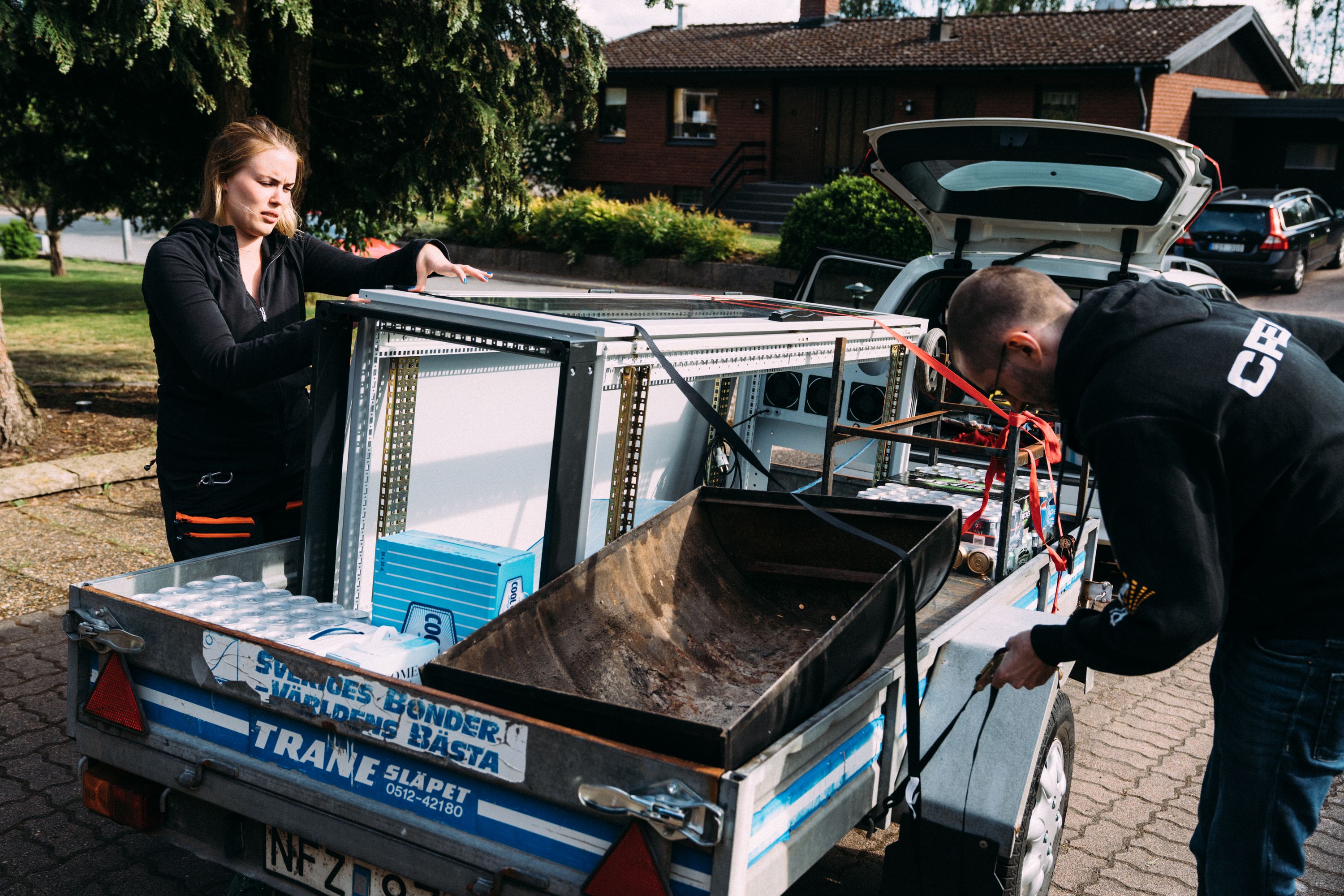 Since we basically have to rebuild the rack from inside out in order to fit our specifications, we start with tearing down all the innards and throwing away all the pieces that won’t be needed for this project. 42U racks are designed to hold load while standing up, not laying down. This means that a lot of retrofitting has to be done in order to make sure that the structural integrity is still solid when 8 drunk people are leaning on this beast. 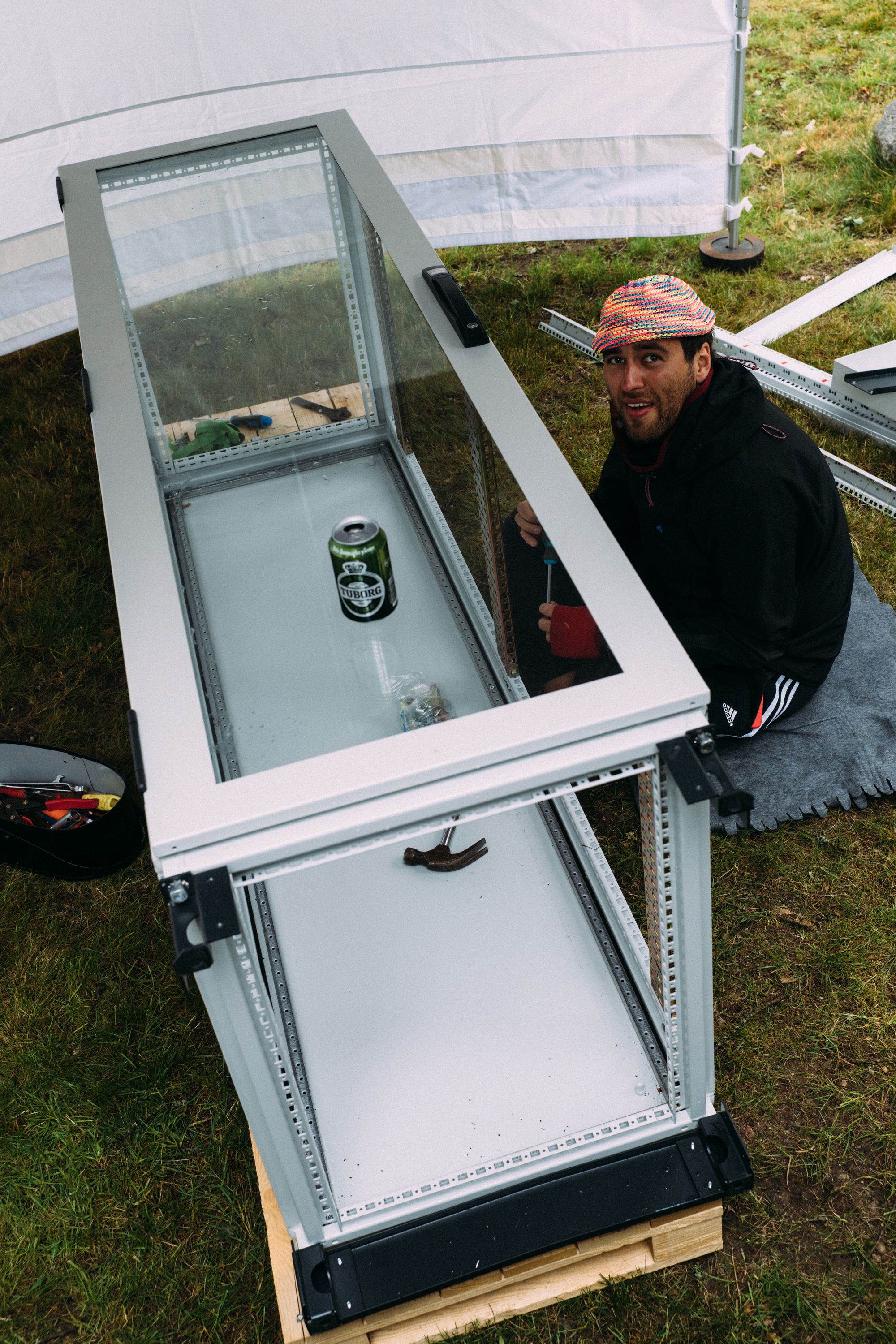 The next step is to mask all of the glass out in order to paint the outer and inner enclosure black. We decided early on that the 90s grey that the rack came in was a bit too much for us to handle in terms of surrounding design so covering this up was the first priority. 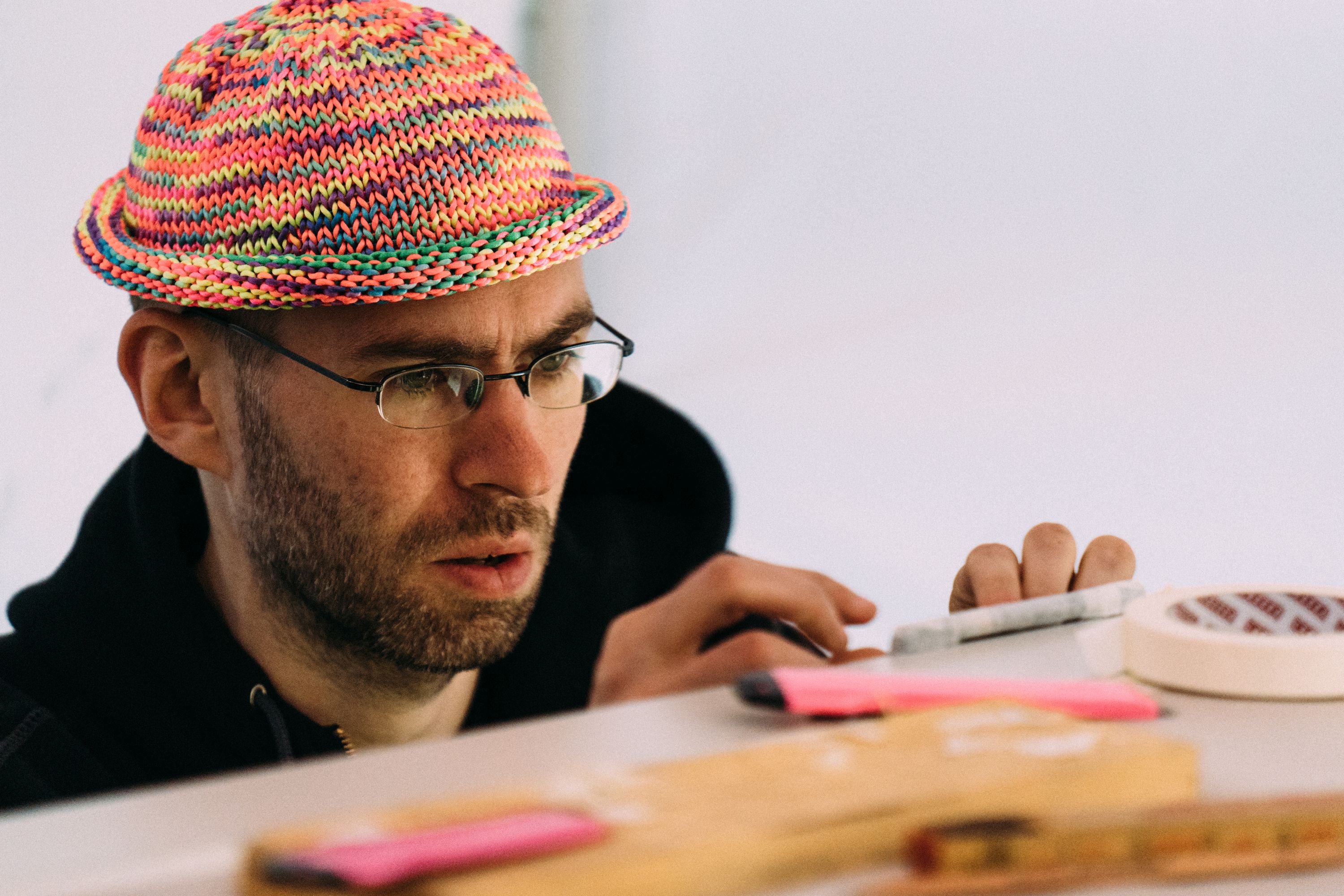 While me, Alexander and Viktor was working on the hardware side of the rack, Johanna started paining the pieces that would fit inside of this rack and be illuminated by UV LEDs. Initially Johanna had sketched up these “la croix” style patterns that would invoke feelings of bad 90s design but still be visually pleasing 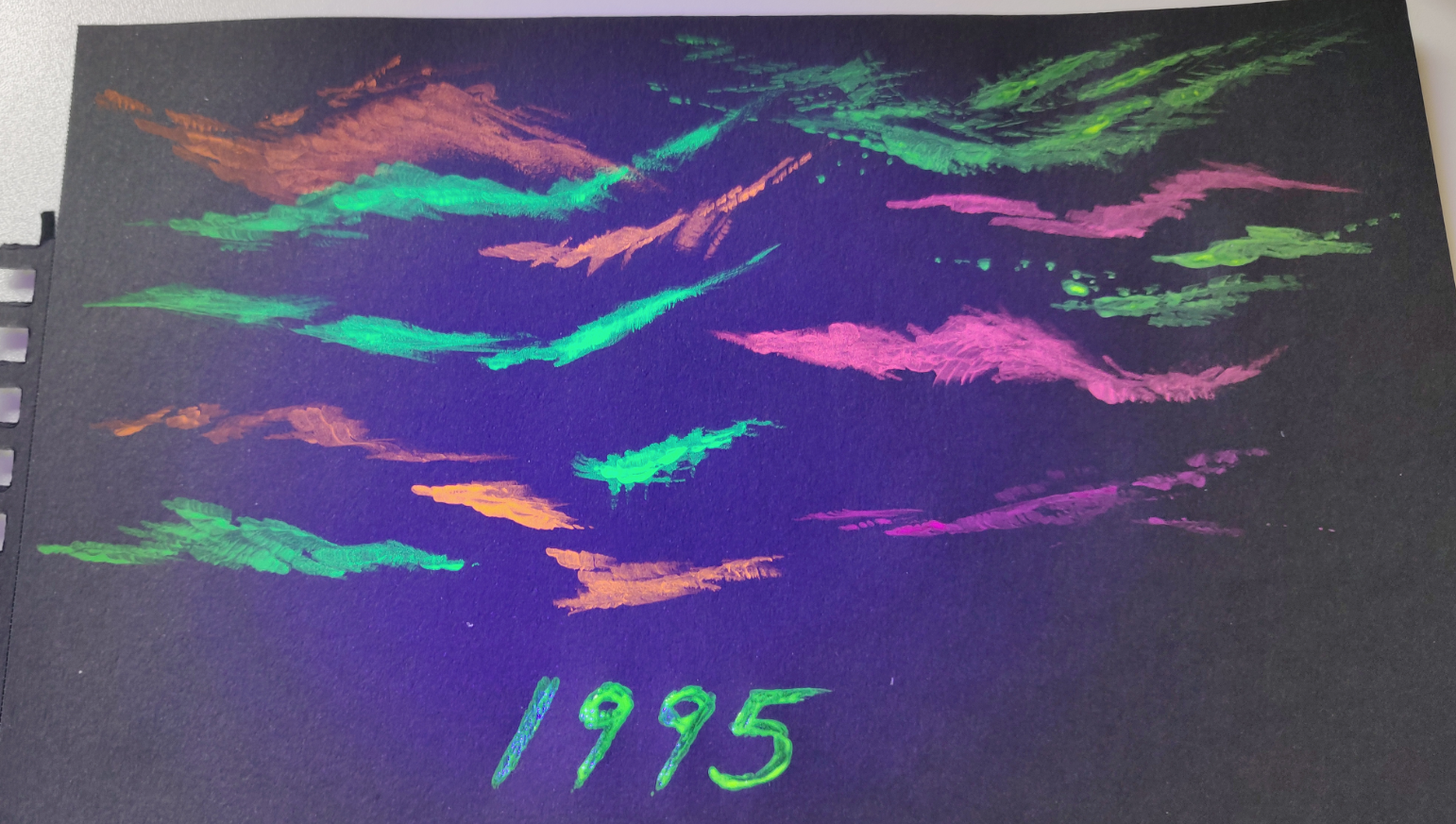 Once we got the plywood, Johanna ended up forgoing this design and focusing on filling in the natural wood instead. The plywood piece that we bought had these beautiful natural wood lines that could be traced with the neon colors to create a beautiful pattern. 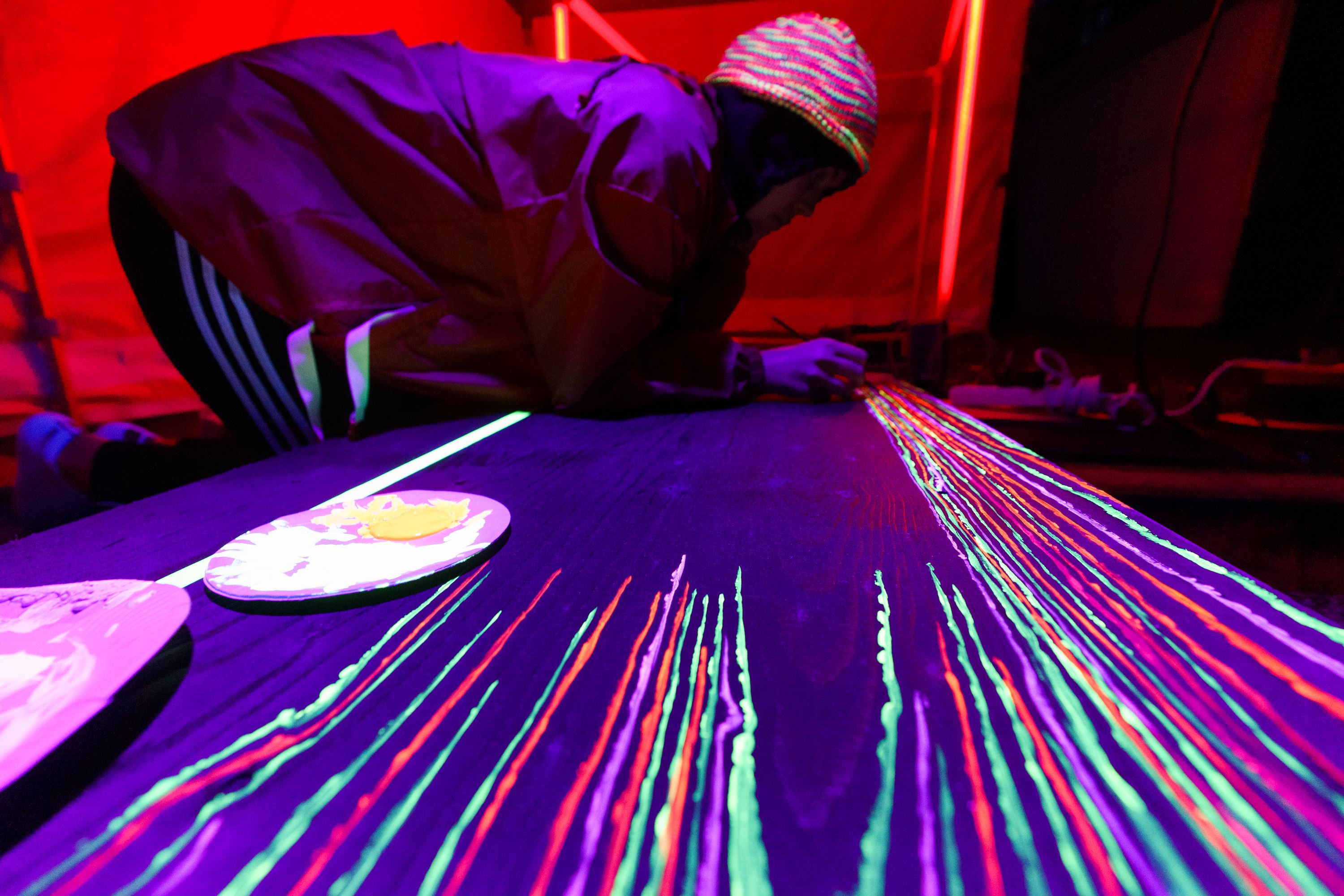 Since the drink inventory would be slanted, there would be room underneath to stash all technology to drive the Raspberry Pi’s and LEDs in order to power the dashboard, modems and landline phone project. The LEDs underneath the acrylic ice is a strip of APA102 powered by a Pixelblaze in order to facilitate easy animations. In the end we settled for slow moving color shifts between colors that worked with the neon colors. 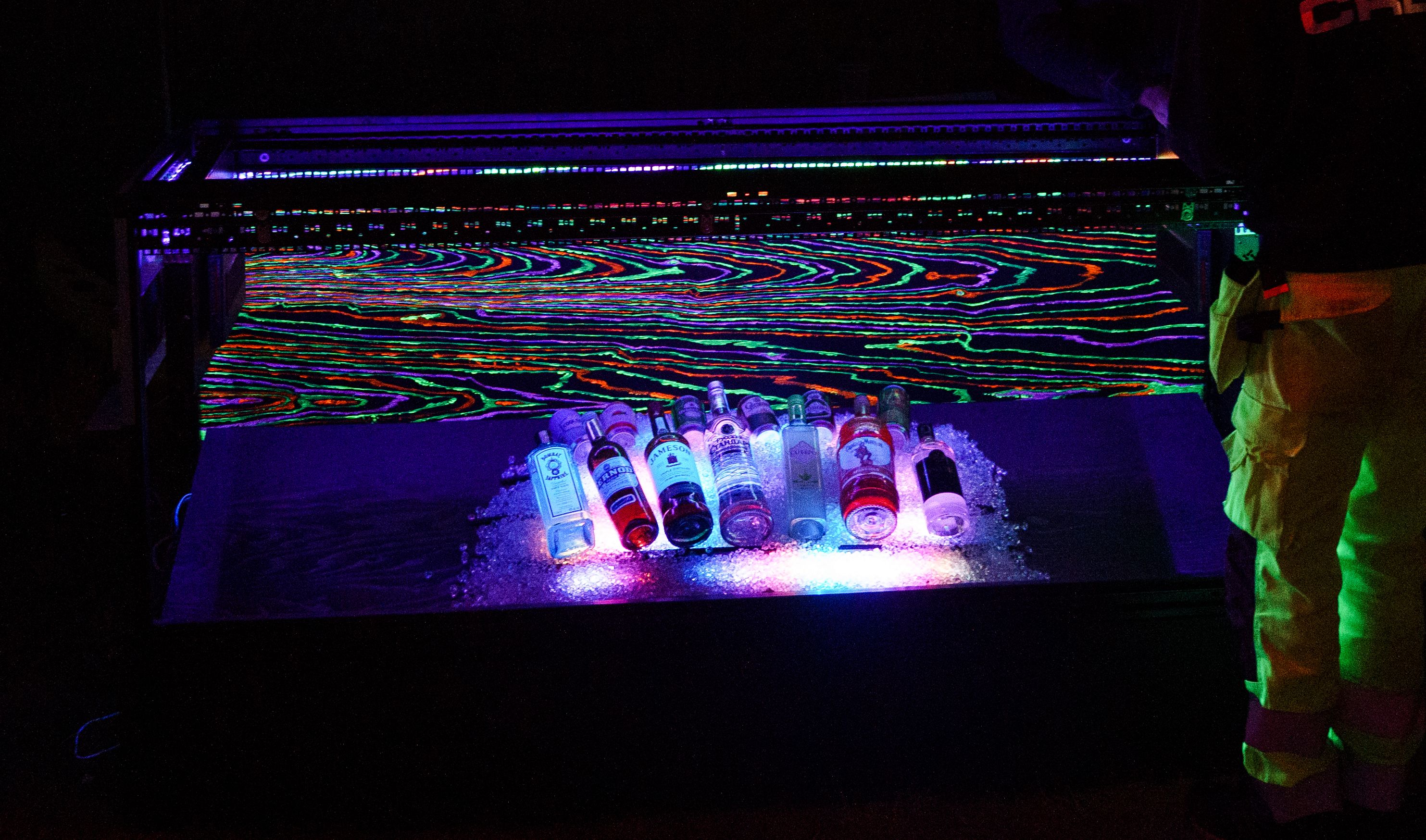 Sadly we underestimated the amount of fake ice that would be needed to cover an area like this so we had to settle on centering the drink inventory. Due to this miscalculation of acrylic ice, there was room to add more UV paintings on the slanted area in order to fill out the visual negative that currently existed. 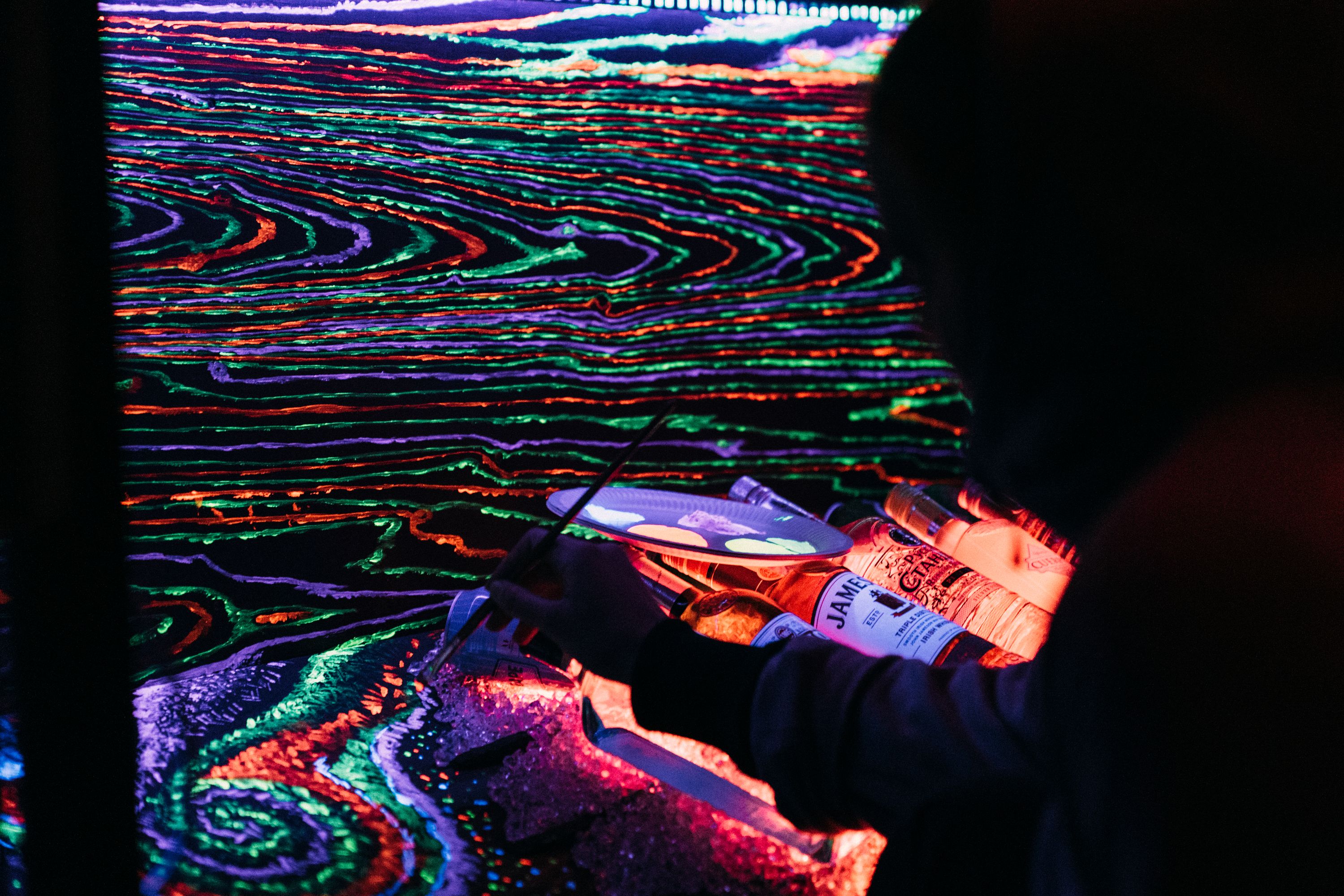 As I talked about last year, it’s really something to have these projects materialize in a physical form after thinking about them for so long. This particular project took a lot of slow burning thinking and group visualizing over voice chat which made it so complex to pull off. The end result, albeit not enough ice, was better than what I had imagined that we could pull off. 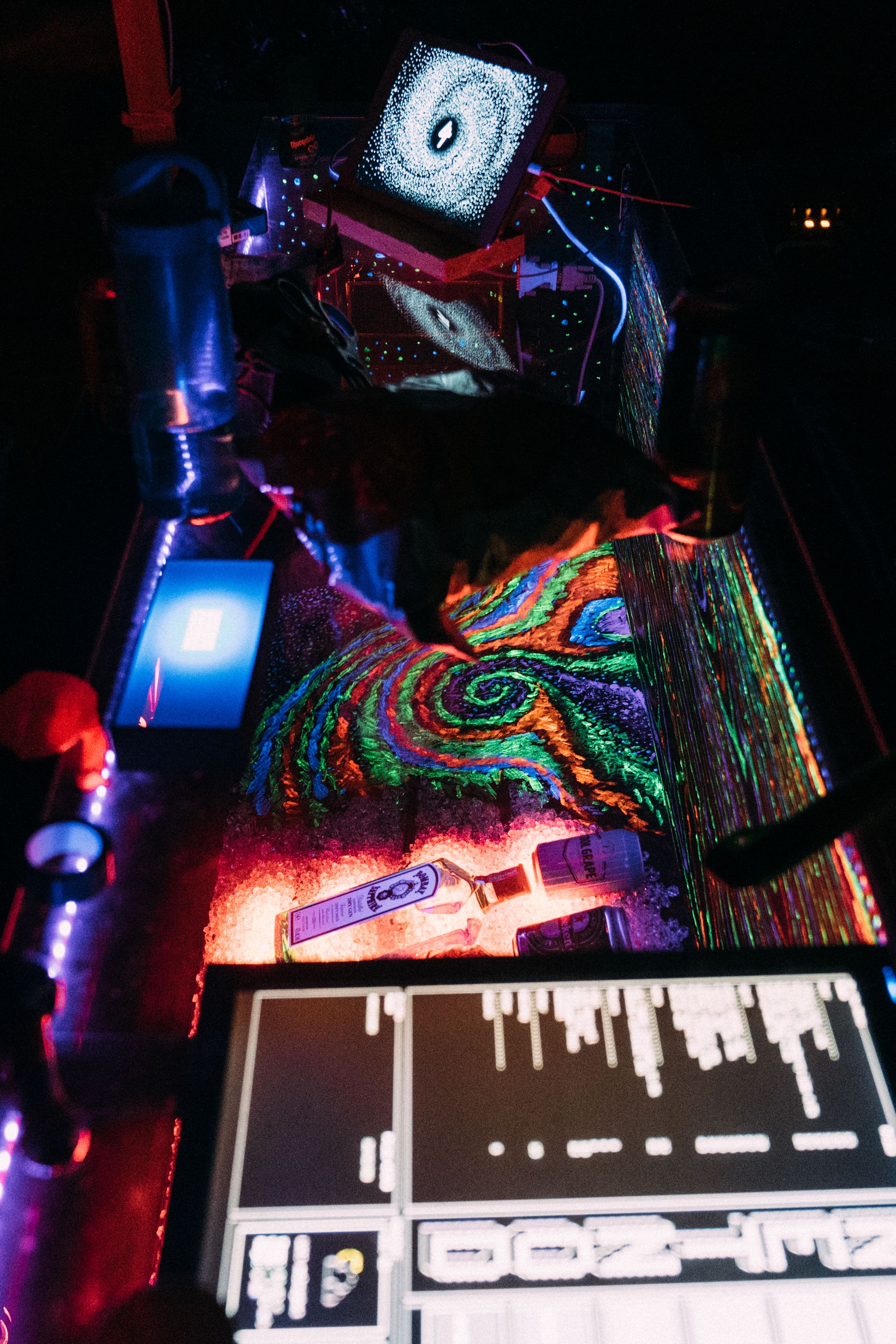 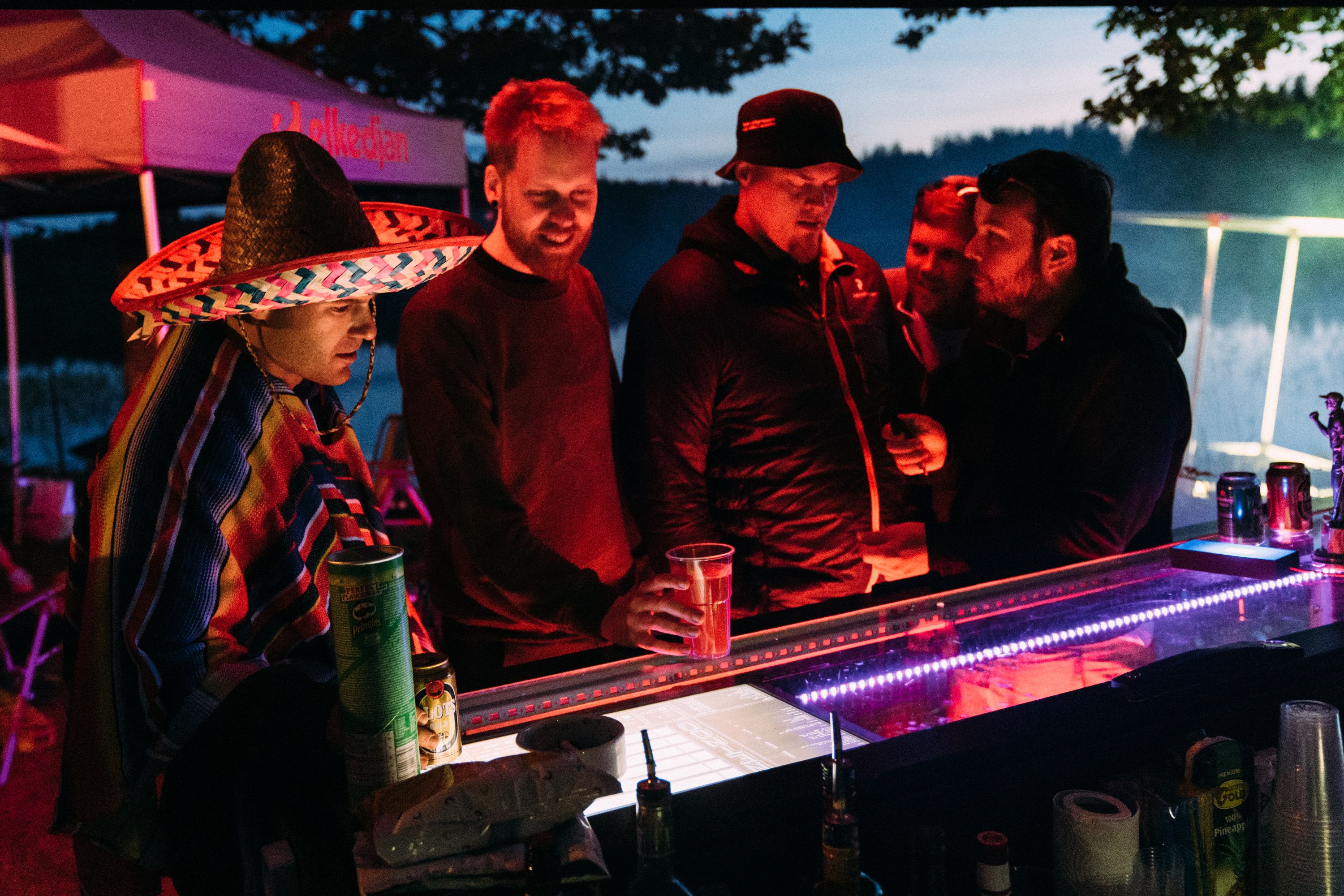 Kåsböle North of Umeå there is a small village by the name of “Kåsböle”. In order to get some peace and quiet after ANDERSTORPSFESTIVALEN I embarked on a